A month before launching, the IEX Exchange is continuing its marketing campaign effort.

After numerous challenges which have been set up by the traditional industry for the alternative IEX Exchange, the company is well on its way to roll out later this summer. With merely a month separating the company from the official launch of the service, a marketing campaign is starting to hit the wires.

The company has made available via its YouTube channel a ‘Product & Philosophy’ video which elaborates on the main benefits that the company is aiming to bring to the market. With the face of one of the co-founders of the IEX Exchange, Brad Katsuyama becoming known industry-wide after the publication of the “Flash Boys” book by Michael Lewis, the company is now waiting for D-Day.

Starting from the 2nd of September the IEX is set to become the 13th regulated exchange in the U.S. The company however is very different to its peers. The co-founders of the firm have been aiming to democratize market access for traders that are being front run by high-frequency trading (HFT) shops.

A number of brokerages in the retail industry announced in the aftermath of the publication of “Flash Boys” that they will be routing orders to the alternative trading system (ATS) which IEX is still at present. The official rollout of the exchange is going to gradually occur as the company tests its services.

At the heart of the offering is a speed bump that is placed in front of the matching engine of the exchange. The 38-mile coil of optical fiber which is located at the entry point to the unit is adding a round-trip delay of 0.0007 seconds. The company has managed to therefore prevent high-frequency trading (HFT) companies from front running other traders with slower connections. 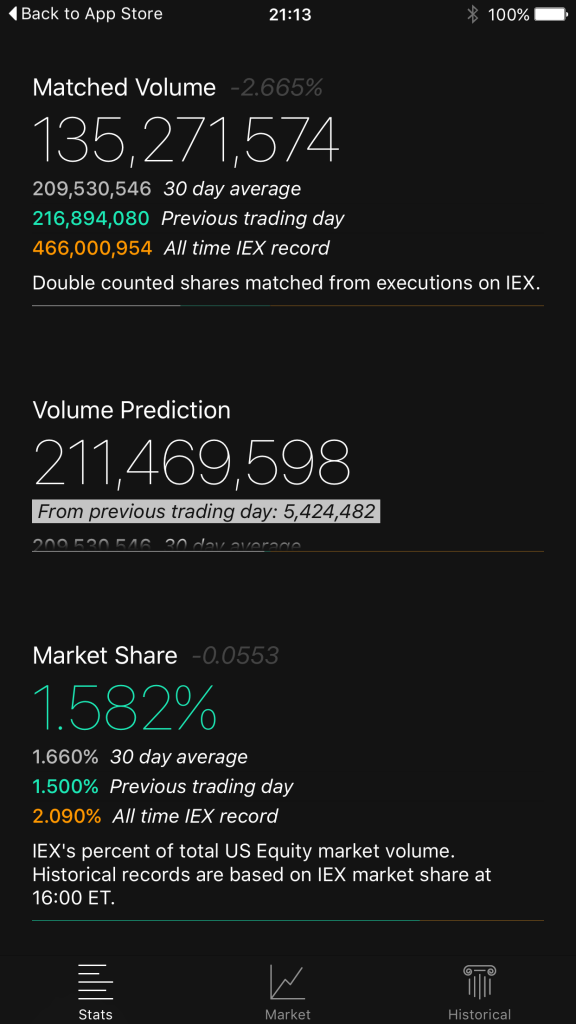 Last week the company launched its new app, introducing the first mobile application with similar functionality. Anyone who installed the iOS and Android solution has real-time view of the U.S. stock market with not only the volumes transacted on the exchange itself, but a broad view of the U.S. stock market. BATS Global Markets has been providing such information for over eight years now on its website.

The app is available via Apple’s App Store and Google Play and is currently displaying information from the IEX alternative trading system. Article and media originally published by Victor Golovtchenko at financemagnates.com