Opinion: How to Make Money in the Stock Market from the Fed’s Next Move

Here’s a tip on how to profit from the markets’ obsession with the Fed’s meeting this week. Just wait 30 minutes after the Fed’s interest-rate announcement — scheduled for Wednesday at 2 p.m. Eastern — and bet that the stock market will reverse however it reacted in those first 30 minutes.

The reason this is a bet worth considering: Regardless of what the Fed’s interest-rate setting committee does or says this week, we know that it will have virtually no real-world consequence. So the markets’ initial response will be a knee-jerk reaction based on hype rather than facts, and almost certainly will get corrected.

Let me hasten to add that I am not saying that interest rates don’t matter. They of course do. But if you accept that the Fed will be raising rates sooner or later anyway, the question we then should be asking is whether it makes any significant difference whether rates are raised three or six months sooner or later than previously expected. And the answer is no.

I invite those of you who don’t believe me to calculate the discounted value of any financial series over coming years, be they stock prices, dividends, corporate earnings, and so on, assuming different interest rates. You’ll find that a several-month acceleration or delay in the timing of a quarter-point rate increase makes hardly any difference to its present value.

To be sure, there are other possible reasons why a premature rate hike could have real-world consequences, such as by discouraging corporate capital investment. But, in an interview, Duke University finance professor John Graham discounted that possibility. Graham is the director of the Duke CFO Global Business Outlook survey, and he told me that CFOs are now more upbeat than they have been in a decade — since before the 2008-09 financial crisis, in other words. He added that they’ve been upbeat ever since President Donald Trump’s election, but have become even more so as tax reform legislation has become increasingly likely to pass.

Take what happened the last time I devoted a column to this subject, just prior to the Fed’s June interest-rate-setting meeting. Notice from the accompanying chart how the S&P 500 SPX initially plunged following the Fed’s announcement that it was raising short-term rates to 1.25%. But then, sure enough, the market quickly corrected itself. 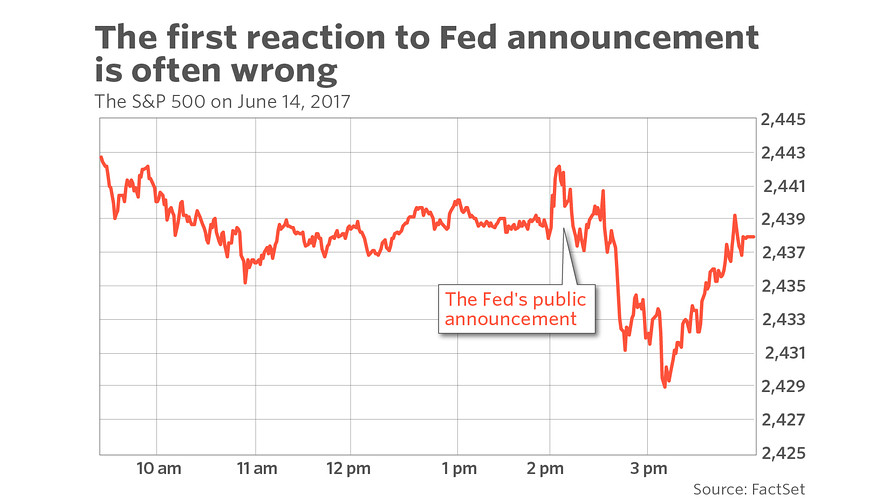 Of course, what I am entertaining here is a short-term trade for speculative money only. For most of us, the proper reaction will be to do nothing. But, at a minimum, it’s fun to contemplate how we might profit from what otherwise appears to be much ado about nothing.